Putting for a cause: Keystone raises $1M for autism after latest annual outing

It’s always a great day on the green…but this special event sponsored by Keystone helps bring in the green – all for a great cause.

On Wednesday, October 12 in Clifton, VA, Keystone held its annual KIG Fore Autism Golf Classic, supporting the Autism Society of America and its mission to create connections, empowering everyone within the Autism community to live fully. The event is generously supported by many of our carrier, vendor, and agency partners, who also play in the tournament itself. In addition to the tournament, many valuable items are up for grabs via a raffle…everything from sports memorabilia to game tickets have been up for grabs.

Annually, the Autism Society supports over 600,000 individuals and families nationwide through education, advocacy, support, information and referral services, and community-building opportunities. It couldn’t be done alone without the support of generous individuals – and some good sports!

Since 2009, Keystone has made Autism its corporate cause to promote awareness and acceptance of individuals and families impacted by autism. In 2012, our Chief of Staff, Joe Joyce, was elected to the Autism Society of America’s Board of Directors, has also served as Treasurer, and is on the Executive Committee as Board Chair for the organization. We organize, sponsor, and donate to many events throughout the year aside from the golf classic, including the Autism Big Give, and local events. 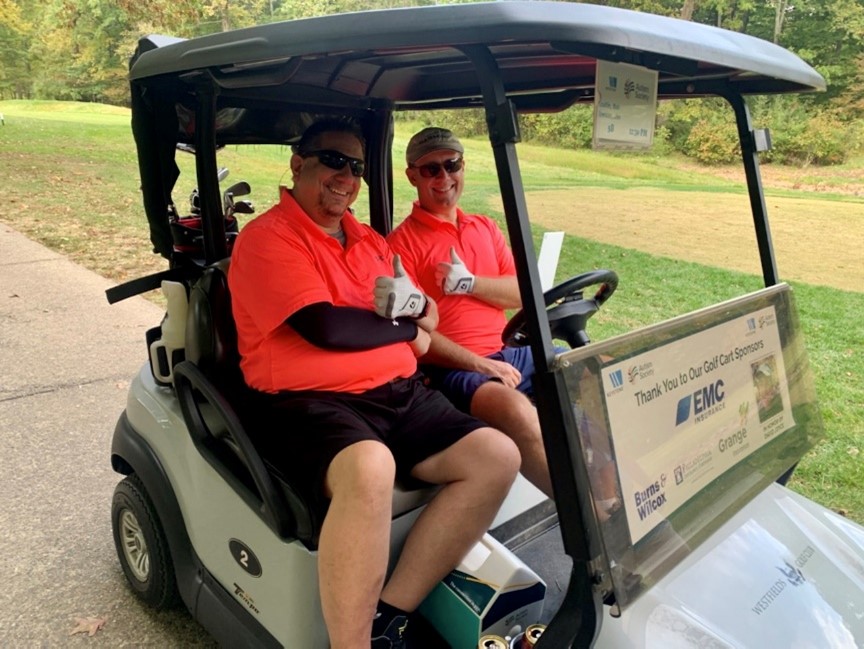 Our HR Director Jim Spencer (left) and CTO Bob Scullin (right) are part of a foursome – but the outfits were NOT pre-planned. According to Bob, “Yes, Jim and I are wearing the same shirt. Yes, Jim and I both never wore the shirts before and cut the tags off that morning. Yes, we are also wearing the same gloves. No, we didn’t plan any of it!”

This year’s event raised $155,000 for The Autism Society of America, bringing Keystone’s total efforts to more than $1M to help families and those impacted by autism! It’s a goal near and dear to the hearts of those involved in the classic and related events as many of our carrier and agents partners, and staff are impacted by autism.

Joe Joyce’s son, David, has autism, and has required special assistance throughout his life. The Classic helps highlight just who and how lives are improved through generosity.

“My wife, Elise, and I are overwhelmed by the outpouring of generosity from Keystone agencies, staff, carrier partners, and other associates,” said Joyce. “This event has raised awareness and acceptance for autism throughout the country. We are extremely grateful to Keystone for embracing autism as our corporate cause. We are also very proud of our son, David, for being the inspiration for this effort. Although being on the autism spectrum, non-verbal and having severe self-injurious behaviors, David has advocated for the cause of autism in his own way and has made a difference in the world. We are also proud of our son Matt, a young adult with Downs Syndrome, who has become Keystone’s spokesperson for the Autism cause, speaking on behalf of his brother David. Thank you, all, once again!”

Chris Banks, President/CEO of The Autism Society of America, stated “I can’t thank you enough for all and everything you did to make the golf tournament so hugely successful. Thank you for all you do for the Autism community and the Autism Society. You are most definitely the Connection.”

AmTrust was the sponsor of this year’s winning team (pictured above.) The winning foursome will move on to the National Finals at Kiawah Island Golf Resort near Charleston, SC, for a 72-hole cumulative scramble tournament.

This is just one of the ways that we help champion the independent spirit among all of us!